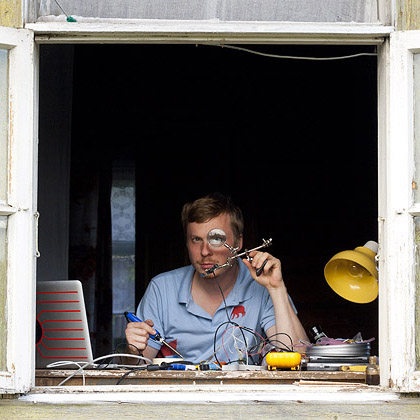 BACKGROUND STORY
My main inspiration for creating works of art derives from our ever-changing society in the technological era. Since I was born in a scientist-meets-economist family, I was in touch with technology from an early age in the 1980s. In the Soviet Union, technology that was not generally available had to be self-built. Our home was equipped with self-made computers, radios, satellite receivers, etc. DIY was the normal way of thinking.

Over the years, as digital systems progressed, I started noticing changes in our daily lives - the way we used cities, talked to our friends, took photos or thought about ourselves. It all seemed to lead somewhere unknown and that unknown became the topic of my works.

I tried to relate to this topic by studying computer science and mathematics, but it did not lead me to the questions and solutions I was looking for. Instead, photography, which started as a hobby, gave me the tools I needed to see and analyze the world. I started using it to document public life on the streets and the private lives of my peers. My studies at the Estonian Academy of Arts developed my skills in analyzing society within the medium of photography.

Unfortunately, the topics I wanted to research were not particularly photogenic. The virtual parts of our lives are not well suited for documentation by the tools made for recording physical reality. It became clear that the camera is not the best tool for documenting and talking about the new layer of reality. By stepping out from behind the camera with a wish to document and critically analyze society, new possibilities emerged. Technology became the subject of my works as well as being a tool used in them. It has facilitated the exposure of the virtual layers of our daily lives in a meaningful, expressive and effective way.